To meet the Sustainable Development Goals (SDGs) targets by 2030, countries must safeguard the gains already attained and accelerate efforts to achieve affordable, reliable, sustainable and modern energy for all.

WASHINGTON, May 28, 2020 — Despite accelerated progress over the past decade, the world will fall short of ensuring universal access to affordable, reliable, sustainable, and modern energy by 2030 unless efforts are scaled up significantly, reveals the new Tracking SDG 7: The Energy Progress Report released today by the International Energy Agency (IEA), the International Renewable Energy Agency (IRENA), the United Nations Statistics Division (UNSD), the World Bank, and the World Health Organization (WHO).

According to the report, significant progress had been made on various aspects of the Sustainable Development Goal (SDG) 7 prior to the start of the COVID-19 crisis. This includes a notable reduction in the number of people worldwide lacking access to electricity, strong uptake of renewable energy for electricity generation, and improvements in energy efficiency. Despite these advances, global efforts remain insufficient to reach the key targets of SDG 7 by 2030.

The number of people without access to electricity declined from 1.2 billion in 2010 to 789 million in 2018, however, under policies that were either in place or planned before the start of the COVID-19 crisis, an estimated 620 million people would still lack access in 2030, 85 percent of them in Sub-Saharan Africa. SDG 7 calls for universal energy access by 2030.

Other important elements of the goal also continue to be off track. Almost 3 billion people remained without access to clean cooking in 2017, mainly in Asia and Sub-Saharan Africa. Largely stagnant progress since 2010 leads to millions of deaths each year from breathing cooking smoke. The share of renewable energy in the global energy mix is only inching up gradually, despite the rapid growth of wind and solar power in electricity generation. An acceleration of renewables across all sectors is required to move closer to reaching the SDG 7 target, with advances in heating and transport currently lagging far behind their potential. Following strong progress on global energy efficiency between 2015 and 2016, the pace has slackened. The rate of improvement needs to speed up dramatically, from 1.7 percent in 2017 to at least 3 percent in coming years.

Accelerating the pace of progress in all regions and sectors will require stronger political commitment, long-term energy planning, increased public and private financing, and adequate policy and fiscal incentives to spur faster deployment of new technologies An increased emphasis on “leaving no one behind” is required, given the large proportion of the population without access in remote, rural, poorer and vulnerable communities.

The 2020 report introduces tracking on a new indicator, 7.A.1, on international financial flows to developing countries in support of clean and renewable energy. Although total flows have doubled since 2010, reaching $21.4 billion in 2017, only 12 percent reached the least-developed countries, which are the furthest from achieving the various SDG 7 targets.

The five custodian agencies of the report were designated by the UN Statistical Commission to compile and verify country data, along with regional and global aggregates, in relation to the progress in achieving the SDG 7 goals. The report presents policymakers and development partners with global, regional and country-level data to inform decisions and identify priorities for a sustainable recovery from COVID-19 that scales up affordable, reliable, sustainable and modern energy. This collaborative work highlights once more the importance of reliable data to inform policymaking as well as the opportunity to enhance data quality through international cooperation to further strengthen national capacities. The report has been transmitted by SDG 7 custodian agencies to the United Nations Secretary-General to inform the 2030 Agenda for Sustainable Development’s annual review.

Please note that the report’s findings are based on international compilations of official national-level data up to 2018 while also drawing on analysis of recent trends and policies related to SDG 7 targets.

Access to electricity: Since 2010, more than a billion people have gained access to electricity. As a result, 90 percent of the planet’s population was connected in 2018. Yet 789 million people still live without electricity and despite accelerated progress in recent years, the SDG target of universal access by 2030 appears unlikely to be met, especially if the COVID-19 pandemic seriously disrupts electrification efforts. Regional disparities persist. Latin America and the Caribbean, Eastern Asia and South-eastern Asia are approaching universal access but Sub-Saharan Africa lags behind, accounting for 70 percent of the global deficit. Several large access-deficit countries in the region have electrification growth rates that are not keeping up with population growth. Nigeria and the Democratic Republic of Congo (DRC) have  the largest deficits, with 85 million and 68 million unelectrified people, respectively. India has the third largest deficit with 64 million unelectrified people, although its rate of electrification outpaces population growth. Among the 20 countries with the largest access deficits, Bangladesh, Kenya, and Uganda showed the greatest improvement since 2010, thanks to annual electrification growth rates in excess of 3.5 percentage points, driven largely by a comprehensive approach that combined grid, mini grid and off-grid solar electrification.

Renewables: The share of renewables in the global energy mix reached 17.3 percent of final energy consumption in 2017, up from 17.2 percent in 2016 and 16.3 percent in 2010. Renewables consumption (+2.5 percent in 2017) is growing faster than global energy consumption (+1.8 percent in 2017), continuing a trend in evidence since 2011. Most of the growth in renewables has occurred in the electricity sector, thanks to the rapid expansion of wind and solar power that has been enabled by sustained policy support and falling costs. Meanwhile, the use of renewables in heating and transport is lagging. An acceleration of renewables across all sectors will be needed to achieve SDG target 7.2. The full impact of the COVID-19 crisis on renewables is yet to become clear. Disruption to supply chains and other areas risks delaying deployments of wind and solar PV. The growth of electricity generation from renewables appears to have slowed down as a result of the pandemic, according to the available data. But they so far appear to be holding up much better than other major fuels such as coal and natural gas.

Energy efficiency: Global primary energy intensity – an important indicator of how heavily the world’s economic activity uses energy – improved by 1.7 percent in 2017. That is better than the 1.3 percent average rate of progress between 1990 and 2010 but still well below the original target rate of 2.6 percent and a marked slowdown from the previous two years. Specific metrics on energy intensity in different sectors indicate that improvements have been fastest in the industry and passenger transport sectors, exceeding 2 percent since 2010. In the services and residential sectors, they have averaged between 1.5 percent and 2 percent. Freight transport and agriculture have lagged slightly behind. Achieving SDG target 7.3 for energy efficiency will require the overall pace of improvement to accelerate significantly to around 3 percent a year between 2017 and 2030. But preliminary estimates suggest that the rate remained well below that level in 2018 and 2019, making an even more substantial increase in the coming years necessary to reach the SDG 7 target.

International financial flows: International public financial flows to developing countries in support of clean and renewable energy doubled since 2010, reaching $21.4 billion in 2017. These flows mask important disparities with only 12 percent of flows in 2017 reaching those most in need (least developed countries and small island developing states). To accelerate renewable energy deployment in developing countries, there is a need for enhanced international cooperation that includes stronger public and private engagement, to drive an increase of financial flows to those most in need – even more so in a post-COVID-19 world. 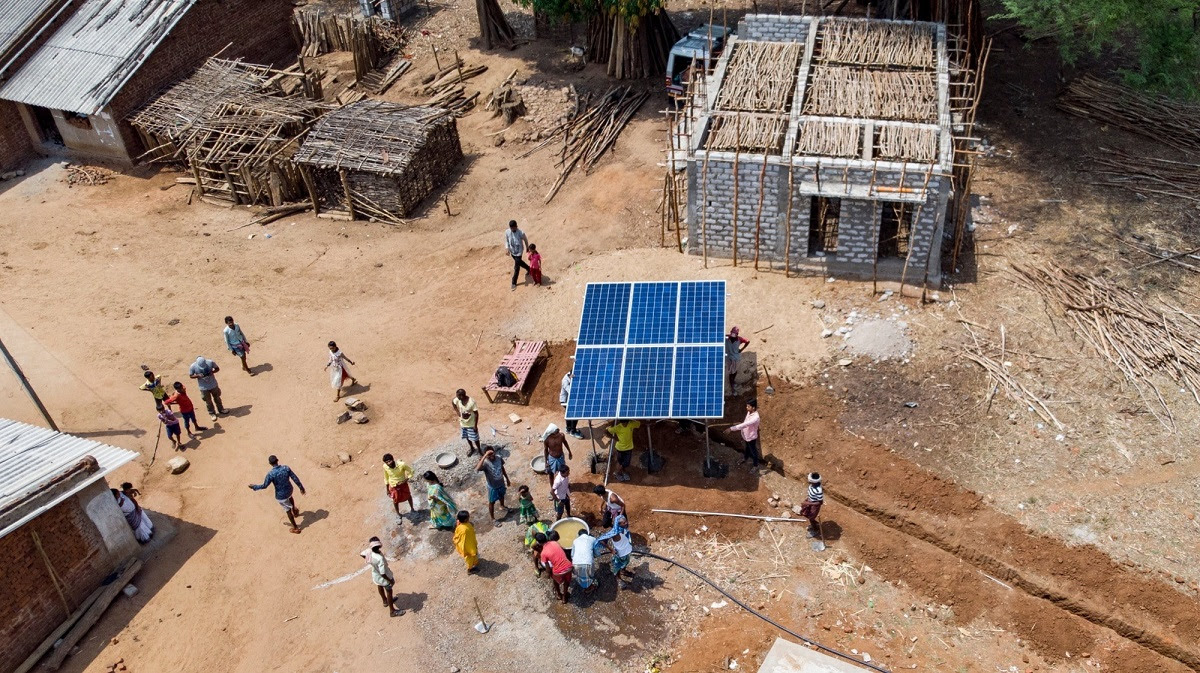 “The COVID-19 pandemic has highlighted the deep inequalities around the world in terms of access to modern, affordable and sustainable energy. Electricity has been a vital underpinning of the response to the public health emergency in many countries – but hundreds of millions of people worldwide still lack basic access to it, with the majority of them in Sub-Saharan Africa,” said Dr Fatih Birol, Executive Director of the International Energy Agency. “Even before today’s unprecedented crisis, the world was not on track to meet key sustainable energy goals. Now, they are likely to become even harder to achieve. This means we must redouble our efforts to bring affordable, reliable and cleaner energy to all – especially in Sub-Saharan Africa, where the need is greatest – in order to build more prosperous and resilient economies.”

“Access to reliable energy is a lifeline, especially in the context of the COVID-19 crisis. It is essential not only for preventing and addressing the pandemic but also for accelerating the recovery and building back better by securing a more sustainable and resilient future for all,” said Riccardo Puliti, Global Director for Energy and Extractive Industries and Regional Director for Infrastructure in Africa at the World Bank. “The report provides solid data and evidence that build the case for why it is necessary to act now, especially in Sub-Saharan Africa, where under the status quo, 530 million people–or more than two times the population of Nigeria–will still be without electricity in 2030.”

“Renewable energy is key to achieving SDG 7 and building resilient, equitable and sustainable economies in a post COVID-19 world. Now more than ever is the time for bold international cooperation to bridge the energy access gap and place sustainable energy at the heart of economic stimulus and recovery measures. IRENA is committed to scale up action with its global membership and partners to channel investment and guide policy intervention in pursuit of sustainable development for all humankind,” said Francesco La Camera, Director-General of the International Renewable Energy Agency (IRENA).

“This report is an exemplar case of cooperation between the custodian agencies of SDG 7 to present comprehensive data and analysis, delivering a common message regarding the progress towards ensuring access to affordable, reliable, sustainable and modern energy for all. As to the current situation, it concludes that the COVID-19 pandemic can either widen the sustainable energy access gaps or accelerate the path towards achieving SDG 7, depending mostly on priorities of national economic stimulus packages and the global response to support those most in need,” said Stefan Schweinfest, Director, United Nations Statistics Division (UNSD).

“In this time of a global health crisis, protecting the health of 3 billion people without clean cooking solutions is more critical than ever. Governments, foundations, donors, and the private sector need to combine their efforts to accelerate the transition to clean and sustainable fuels and technologies to protect the health of the most vulnerable population,” said Dr Naoko Yamamoto, Assistant Director-General, Division of Universal Health Coverage/Healthier Populations, World Health Organization (WHO).

This is the sixth edition of this report, formerly known as the Global Tracking Framework (GTF). This year’s edition was chaired by the International Renewable Energy Agency (IRENA).

The report can be downloaded here.